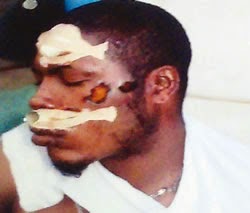 A barman, who works in a hotel located on Obokun Avenue, in the Ojodu area of Lagos, is battling with wounds he sustained during an ‘unprovoked’ attack by a customer.

Punch Metro learnt that the alleged attacker, Kelvin Friday, a resident of Ojodu-Abiodun, Ogun State, allegedly stabbed the barman, who he accused of staring at him and his girlfriend.

It was gathered that Friday and his girlfriend, whose name had yet to be ascertained, had gone to drink in the hotel around 6pm on October 21, when the incident happened.


The victim, Simeon Tenebe, claimed he was brooding on an issue he had discussed with his sister earlier in the day when the 25-year-old man confronted him. He added that Friday interpreted his stare for rebuke and challenged him to a scuffle.

Friday reportedly smashed the bottle of beer he was drinking on the barman, inflicting injuries on his face and head. His girlfriend, it was learnt, fled the scene when Tenebe started bleeding.

Prior to the incident, it was said that Friday had accused the barman of being unpleasant while attending to him and his girlfriend.

Punch correspondent also gathered that Tenebe reported the incident to the police, who arrested the suspect and charged him to an Ikeja Magistrate’s Court for assault.
Posted by Felix Akintunde at 22:19

Email ThisBlogThis!Share to TwitterShare to FacebookShare to Pinterest
Labels: News