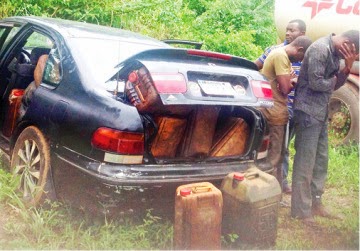 The Ondo State Command of the Nigeria Security and Civil Defence Corps has arrested seven persons in connection with alleged illegal bunkering and adulteration of petroleum products.

Parading the suspects in Akure on Thursday, the state Commandant, Mr. Andrew Ugwumba, said the suspects were arrested at midnight in two separate operations carried out by his men at different locations in the state.

The operatives arrested a set of four suspects who had a tanker load of diesel. According to Ugwumba, the men fled when they sighted NSCDC operatives, but they were chased and arrested.
Posted by Felix Akintunde at 04:09