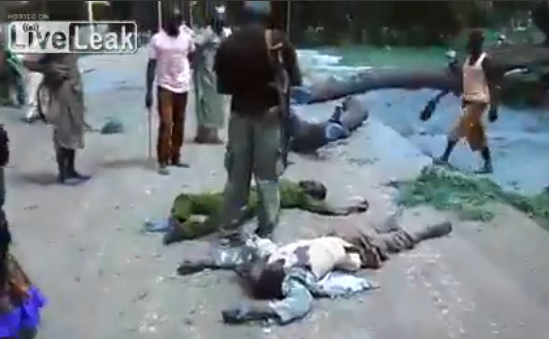 Check out this video of Boko Haram members who died after Nigerian soldiers attacked them in Konduga on 12th of  September.

Narrator: "Look at the (bodies) of the useless Boko Haram."
"So far I've counted 800+"
This statement was acknowledged by another spectator from the background. He says: "this is the hand work of Nigerian soldiers."
Narrator continues: "Look at this one. A very small boy."
"Look at you," he says talking to the corpse.
"So young. You're carrying a gun. How old are u?
"Clumsy lad"
Another spectator indicates: "they have charms."
The narrator dismisses the observation, saying: "useless charms."
"Are they potent?"
He resumes addressing the bodies: "keep on ingesting drugs and you'll continue to die miserably."
This is followed by a foul curse by another spectator as indistinct conversation in a dialect (perhaps Kanuri) is heard
A spectator asks: "among them all do you think there is any responsible person?"
Some women chat, speaking in other dialect.
A spectator sights another cadaver in the undergrowth and draws attention to it.
A spectator picks up a bullet lying by the body
The abdomen of the body is covered with leaves.
And the person who picks the shell of d bullet remarks: "this one was shot. And his body was burnt."
Abrupt FADE OUT.
Vid ends.