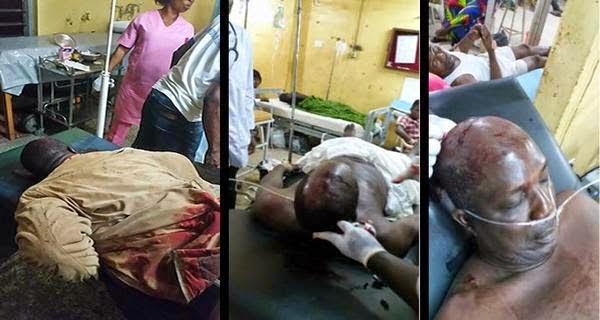 A PDP lawmaker in Benin, Edo State, Hon. Rasak Momoh, was last night attacked by unknown persons at his residence in the Legislators Quarters, Benin City.

Read the story as reported by Punch Metro:

Gunmen have allegedly attacked a member of the Edo State House of Assembly representing Etsako West Constituency 1, Mr. Razak Momoh, at the legislative quarters in Benin.

Momoh was said to have been attacked on Tuesday night by the assailants at his residence. They reportedly left him unconscious before he was rushed to the University of Benin Teaching Hospital, Ugbowo.

A close member of the lawmaker’s family, who pleaded anonymity, said the injuries sustained by the legistlator were such that he might be flown abroad for medical attention.

The Peoples Democratic Party lawmaker, who was said to be receiving medical attention at the Accident and Emergency Ward of the hospital, belongs to a nine-member faction of the assembly, which has been holding separate plenaries, following a crisis which has been rocking the state Assembly since June.

It was also gathered that he had raised the alarm over death threats to his life by some assailants from the riverine area of the state.

Momoh was suspended by the leadership of the Assembly for failing to resume sitting at the old legislative chamber at the Government House, where plenary was relocated to owing to a renovation of the Anthony Enahoro Assembly Complex, located at King’s Square in the state capital.

His seat was also reportedly declared vacant by the Speaker, Uyi Igbe, for defecting to the PDP.

The spokesperson for the Edo State Police Command, DSP Noble Uwoh, who confirmed the incident, stated that arrests had been made and investigations had started on the matter.

Meanwhile, the Edo State chapter of the PDP has condemned the attack on the lawmaker.

The state Chairman, Chief Dan Orbih, said, “The party is gravely worried by the deteriorating security situation in the Edo State occasioned by the heightening political intolerance of the Governor Adams Oshiomhole’s All Progressives Congress-led government to opposing political views.”

Orbih, who described the attack on the PDP member as “bestial”, attributed it to growing desperation by the APC in the face of its “fast dwindling” political support in the state.

The state chairman, while calling on party members to remain calm, urged the Inspector General of Police, Suleiman Abba, to intervene in the matter.

Orbih said, “In a democracy, the right to freedom of association is sacred and must be respected by all.”

But the APC, in its reaction, dismissed the allegation that the attack was masterminded by the party or the state governor.

The State Chairman of the party, Anselm Ojezua, said Oshiomhole had no connection with violence even in his days as President of the Nigeria Labour Congress.

Ojezua described the victim of the attack as “one who has an antecedent of violence.”


He called on the PDP in the state to leave the APC and the governor out of the incident.
Posted by Felix Akintunde at 23:57