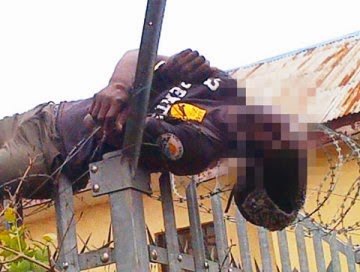 A man, suspected to have attempted stealing diesel from a compound, died on Monday morning after he was electrocuted by an electric barbed fence.

Mr. John Aboy, was killed on Dagin Farouk Road, Jos, Plateau State. The incident was said to have taken place at about 3am.

three suspected diesel thieves had come around the building to perpetrate the act, and Aboy had led the way by attempting to climb over the fence first.

However, he was electrocuted in the process.

It was gathered that when the two other suspects saw that he had been electrocuted, they took to their heels.

Aboy was later found dead on the electric fence in the morning to the bewilderment of passersby and residents of the area.

The police on patrol were said to have arrived at the scene to recover Aboy’s hanging corpse.

"The men had gone there to commit criminal acts. There were three of them. So when the first thief got electrocuted, the other two took to their heels. His corpse was recovered by the police when we got the information.

“People can see the dangers inherent in going out for this kind of criminal acts. At the end of the day, some of them meet their untimely deaths. So it is advisable that youths stop these criminal acts and look for responsible things to do rather than engendering their lives,” he said.
Posted by Felix Akintunde at 01:50