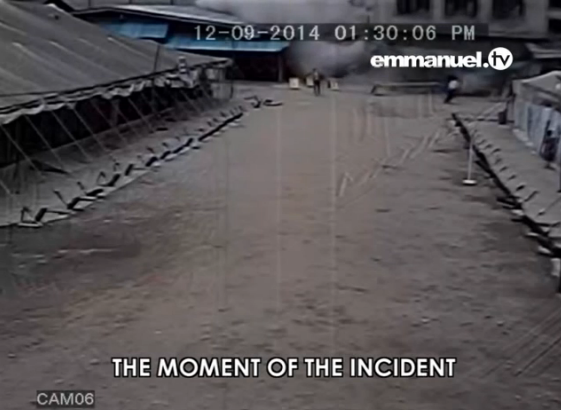 An article from freelance journalist, Ihechukwu Njoku. He wrote it. Apparently there's new footage showing the building collapse that killed 115 people. Find it below.

Maintaining his controversial stand that the tragic collapse of a building at The Synagogue, Church Of All Nations (SCOAN) was an ‘attack’, T.B. Joshua has released new security footage of the incident through Emmanuel TV’s official YouTube channel. The new footage from a security camera stationed in the church premises shows the bottom of the building as people walk innocently around the environment. Suddenly, a huge plume of smoke is seen coming from the side of the building, bystanders running for dear life as the collapse occurs in mere seconds.

A still picture at the end of the shocking footage shows the extent of the disaster with ‘floors piled on top of each other’. Through a Facebook post, the embattled cleric reiterated that, while co-operating with the ongoing investigation into the cause of the fatal collapse, “The church views this tragedy as part of an attack on The Synagogue, Church Of All Nations.” The SCOAN had earlier warned media not to pre-empt the investigation with ‘unconfirmed stories’ that ‘give the impression the collapse was due to structural failure’.

Posted by Felix Akintunde at 00:26