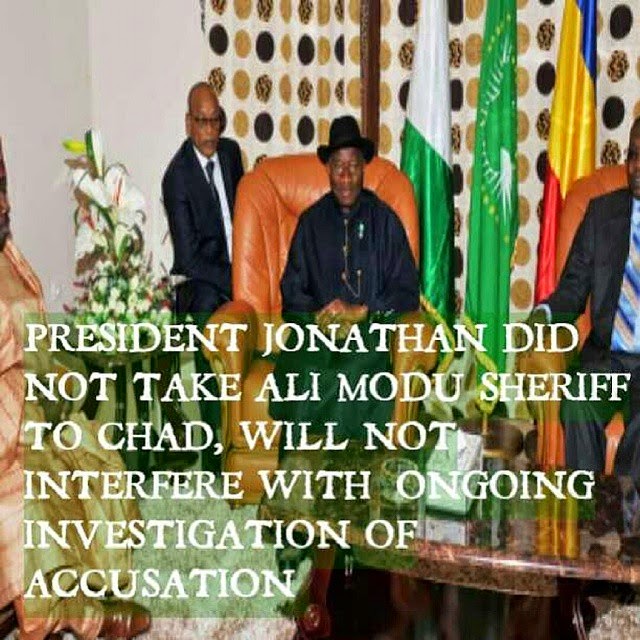 Found this piece on Special Adviser to the President Media & Publicity, Reuben Abati's website.
We have noted with surprise, the unnecessary hue and cry raised by the All Progressives Congress (APC) and other bigoted critics of the Jonathan Administration over the claim that the President is “hobnobbing” with the former governor of Borno State, Senator Ali Modu Sheriff who was recently accused by the Australian, Stephen Davis of being one of the chief sponsors of the terrorist group, Boko Haram.


The totally erroneous basis for that charge was the spurious claim that Senator Sheriff accompanied President Jonathan on his recent trip to Ndjamena as a member of his entourage.
Although, Senator Sheriff himself has already given the lie to that claim through his Media Adviser, the Presidency wishes to affirm, for the purpose of emphasis, that the former Borno State governor was not on President Jonathan’s delegation to Chad.
In keeping with President Jonathan’s commitment to transparency and openness in the conduct of government business, names of the key members of his delegation were announced a day before his trip to Ndjamena.
They included the National Security Adviser, Col. Sambo Dasuki (rtd.), the Minister of Communications Technology, Mrs. Omobola Johnson, the Minister of State for Foreign Affairs, Dr. Nurudeen Mohammed and the Director-General of National Space Research and Development Agency, Prof. Seidu Mohammed.
As can be easily verified from the complete list of members of the Presidential entourage to Chad which was also circulated on Sunday and never changed, Senator Sheriff’s name was not on it. The only other persons on the list were the President’s aides, security personnel and journalists.
The APC and others who rushed to condemn President Jonathan for a non-existent indiscretion would have found, if they took the least trouble to double-check, that there was absolutely no factual basis for their accusation.
Those who associate with Senator Sheriff know that he has longstanding interests in Chad and often spends a lot of his time there. He happened to be in Ndjamena at the time of President Jonathan’s visit and joined other Nigerian residents of the Chadian capital in coming to the airport to welcome their President.
That was the full extent of his participation in the visit and it was also at Ndjamena Airport that the pictures which formed the basis of the bogus allegation of President Jonathan hobnobbing with an “accused sponsor of terrorism” were taken.
The former Governor’s presence in Chad was certainly not at President Jonathan’s instance and he did not participate in any of the President’s discussions with President Idriss Deby or his other engagements in Ndjamena.
President Jonathan is fully aware of the allegation made against Senator Sheriff by Stephen Davis. That allegation is already being investigated by the security agencies who will make their findings known to the public in due course.
The President assures all Nigerians that he has not willfully taken any action that could prejudice the outcome of that ongoing inquiry.
He seizes this opportunity to reassure the nation once again of his total commitment to doing all within his powers to bring all identified and verified sponsors of terrorism to justice, and ending the menace of violent extremism in the country.


Special Adviser to the President
Media & Publicity
September 11, 2014
Posted by Felix Akintunde at 12:23