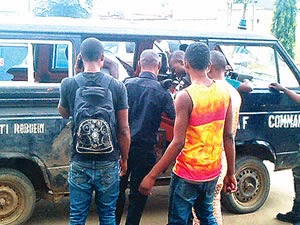 Policemen attached to the Area F Command in Lagos State have rescued a suspected fraudster from being lynched by an angry mob in the Ojodu-Berger area.

The suspect, Akinnifesi, was handed over to the police who were on a patrol.

Akinifesi had, three weeks earlier in the Mushin area, reportedly duped one Daud of N10,000 belonging to his brother, who sent him to withdraw N5,000 from his Diamond bank account.


Our correspondent gathered that the victim came for an event in Berger on behalf of a company when he saw the Ondo-born Akinnifesi passing by and raised the alarm.

Daud said he was going to the bank on the fateful day to cash the money with his brother’s ATM card when the suspect, who claimed to be a stranger in the state, approached him for a direction.

He said he initially turned down the request, but decided to help him being a stranger.

Seventeen-year-old Daud stated further that while leading him to the place, the fraudster, who claimed to be a herbalist, promised to reciprocate his kindness.

He said, “He brought out one small stone and smashed it on my stomach. I was shocked as the stone was no longer in his hand. He told me I am now a powerful person. He then asked me to give him my brother’s ATM card and the pin code. He said if I refused to do so, I will turn mad because of the stone in my stomach. So I gave him out of fear.

“Few minutes later, my brother received an alert that N10,000 had been withdrawn from his account. He beat the hell out of me on getting home,” he said.

A resident and eyewitness, who pleaded anonymity, said fraud was becoming rampant in the area, adding that his brother had also been tricked.

“It is like they are using magic. My brother was duped N20,000 almost the same way. When we caught one of them sometime ago, we gave him the beating of his life,” he said.

The state police spokesperson, Ngozi Braide, could not be reached for comment as calls made to her phone rang out.

Curled from PUNCH Metro
Posted by Felix Akintunde at 03:40