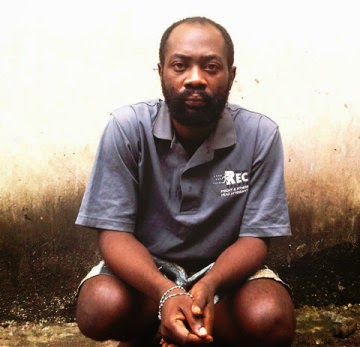 An inmate of the Olokuta Prison, Akure, Ondo State, Mr. Fabian Oladele, who allegedly escaped from the cell in 2013, has been arrested by the Lagos State Police Command.

Oladele was arrested for alleged robbery, snatching of vehicles and diversion of trucks.

PUNCH Metro learnt that Oladele, who was jailed for robbery in Ondo State, had spent 10 months out of his term at the prison before a gang of hoodlums reportedly invaded the cell and freed some of the inmates on June 30, 2013.


The gang had reportedly disarmed the prison wardens during the attack.

Our correspondent gathered from the police that about 175 prisoners, including Oladele, had fled at that time.

However, since his alleged escape from the prison, Oladele, who relocated to Lagos, allegedly joined forces with another gang of robbers who specialised in snatching expensive vehicles and diverting trucks travelling at night.

Our correspondent learnt that 30-year-old Oladele from Okitipupa, Ondo State was arrested by operatives of the Abba Kyari-led Special Anti-Robbery Squad on the instruction of the Commissioner of Police.

It was gathered that Oladele was arrested by the police during a robbery operation at Ojodu Berger, Lagos, on Wednesday, June 18, 2014.

It was said that Oladele, after his arrest, led the police to places where the gang had sold stolen vehicles and trucks in Lagos, Oyo and Osun states.

It was gathered that vehicles snatched by the gang included a Mercedez Benz 406, which had been recovered by the police, a Nissan vehicle and a Toyota jeep.

According to the police, Oladele’s gang also diverted a truck conveying fuel and sold to a buyer in Ibadan, Oyo State.

Other trucks said to be diverted by the gang were sold to buyers in Ogbomoso, Oyo State and Ilesha, Osun State.

Speaking with PUNCH Metro, Oladele who claimed to have finished from a College of Education in Ondo State said he returned to robbery after his prison escape because of greed and bad company.

He said, “I was among the 175 prisoners who escaped from the cell on that night. The incident happened in the midnight.

“It was when I left the prison that I relocated to Lagos. I had earlier been sentenced to prison because of my friend who robbed a house implicated me.

“We were both in the cell together, but I was not sure if he escaped. At that time, I had spent only 10 months.”

“A friend invited me to Lagos. I met one Alhaji Kosomona who had his own gang.

“I joined forces with him . I really regret taking that action now.

“Before she died, my mother had warned me to desist from bad company, but I did not listen. I am reaping the consequences now.

“Alhaji Kosomona and my other gang members are in the cell of the Federal Special Anti-Robbery Squad now.”

Our correspondent learnt that Oladele, who is also wanted by the Ondo State SARS, would be transferred to Akure.

Curled from PUNCH Metro.
Posted by Felix Akintunde at 00:09