Graphic Photo: Dead body of a one-year-old found in an uncompleted building 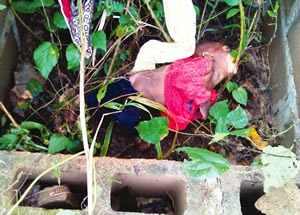 There was confusion on Itele Road, Ewu Ajasa community in Lafenwa, Ogun State, after the corpse of a one-year-old child was found in an uncompleted building.

It was learnt that the corpse was found by labourers clearing weeds around the building.
The men were said to have fled the area immediately they sighted the corpse. It was their hasty retreat that drew the attention of community leaders to the scene.

Punch correspondent learnt that the female child was dumped in the uncompleted building in the early hours of Friday.


Reports from PUNCH Metro when visited the area on Tuesday, it was learnt that the remains of the child had been interred by the community.

However, a cloth said to have been used to wrap the child was sighted by Punch correspondent in front of the building.

A woman, who claimed to be overseeing the construction of the building, described those who abandoned the corpse as wicked.

She said, “I am not the owner of the site, it belongs to a woman who is a member of my church.
“Since she doesn’t live around, she asked me to help her to supervise the building.

“It was on Friday that I was called that they found a dead girl on the site. I was as surprised and horrified as everyone because nobody knows their intention.

“I only went there and left after the community leaders said they would bring in the police.”
Our correspondent learnt from another resident that the baby had signs of infections all over her body.

The secretary of the Community Development Association, Pastor Aseyi Clement, told PUNCH Metro that investigations by the community revealed that the child was dumped by someone living far from the area.

“We first called the Baale, Chief Segun Ajasa, before we reported the matter to the police. We took a picture of the corpse and with the permission of the police, we buried the child. We did that to avert an outbreak of any disease.

“Our investigations showed that the child was brought from a far place and we had to report back to the police so they could also make their findings.”

Our correspondent learnt that a suspect had been arrested and was being interrogated at the Itele Police Station.
Residents said the suspect either threw the corpse into the uncompleted building, or brought the persons that abandoned the corpse.

The Ogun State Police Public Relations Officer, Muyiwa Adejobi, when contacted on the telephone, did not pick his calls.
A text message sent to him had also yet to be replied to as of the time of filing this report.

Posted by Felix Akintunde at 00:37