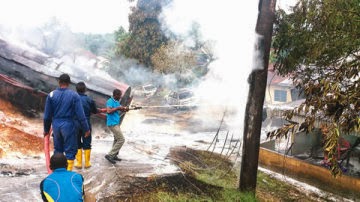 Two unidentified persons were killed on Wednesday following an explosion that occurred after a tanker laden with exploded close to the Eburutu Army Barracks end of the Murtala Mohammed Highway in Calabar, Cross River State.

Read the report below as gathered by Punch Metro


The incident, which happened at about 1.30pm, left pedestrians, commuters and transporters stranded for hours as the intensity of the inferno, which also spread to nearby buildings, slowed down movements in and out of the state capital.

PUNCH Metro learnt that the two dead victims were the driver and the conductor of one the petrol laden tankers.

The driver was burnt to ashes on his seat, while the conductor was flung out of the vehicle.

A large number of sympathisers gathered helplessly to watch the inferno before the arrival of fire fighters 40 minutes after the accident had occurred. Two buildings and two vehicles ─ Audi 80 and Peugeot 505 ─ were also burnt by the fire.

It took the joint intervention of fire services from the Cross River State Government, Calabar Free Trade Zone and Nigeria Ports Authority, to put out the inferno which lasted for over two hours.

An eyewitness, Pastor Godwin Nsa, said the tanker driver tried to overtake another tanker that was loaded with diesel at a tight end of the road when the accident happened.

He said, ““A tanker loaded with petrol tried to overtake another with diesel, unfortunately the former hit the latter from behind and both skidded off the road and their tankers fell. Immediately, the petrol tanker exploded. The driver and his conductor died on the spot.”

Another eyewitness, Mr. Evans Bishop, said the accident happened when the two trailers were trying to avoid some parked trucks owned by a transport company that obstructed the free flow of traffic.

Bishop said in the process, both trailers loaded with petroleum product collided, which resulted in the explosion.

He said, “I came out the moment it happened. A transport company has a terminal close to the scene of the incident and the firm’s trucks were parked by the side of the road. This caused the accident.

“Government ought to have done something about the parking arrangement of these vehicles. It is not right to park on the highway. Other road users should be free to use the road.”

A firefighter from NPA, who craved anonymity, said they responded immediately they got the signal.

No fewer than 12 fire fighting trucks were deployed to put out the inferno.
Posted by Felix Akintunde at 02:41