14-year-old marriage in conflict over pot of stew 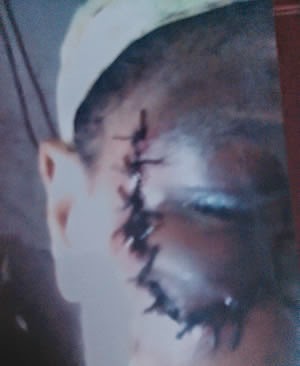 I found this story on Punch website and I was surprised that something like this could happen, please read below.


The marriage between Kamorudeen and Fatimah Bankole is currently in crisis as a result of a disagreement over the fish in their pot of stew.
Fatimah, who is the first of the three wives of Kamorudeen, said the whereabouts of some pieces of fish in the family’s pot of stew, was the last straw in the union that was allegedly filled with abuse and battery.
Fatimah explained that there was an agreement at the beginning of Ramadan that the two wives that were present in the house should take turns to cook for the household on a 15-day basis. The arrangement was such that once the food was ready; the husband was served first, then the children, after which the wives would serve themselves.


She told PUNCH Metro that she had concluded her own 15 days of cooking period, adding that it was now the turn of the youngest wife to cook for 15 days.

“On Wednesday, July 16, 2014, the youngest wife finished cooking and after serving our husband and the children, I went to the kitchen to serve myself. My husband later called me, saying that the junior wife complained that I had taken a big piece of fish in the pot. I tried to explain and in the process he got angry, accusing me of wanting to send the last wife away.

“He beat me up and hit my face with an object. The next thing I realised was that my face was bleeding. I cried for help, and our neighbours intervened and took me to a clinic for treatment.

“I am tired of this marriage; this is not the first time that he will be assaulting me, and he will always apologise and blame the devil for his actions. This time, I am tired,” she said.

The husband, however, denied the wife’s allegation, claiming that Fatimah was a troublesome woman.

Kamorudeen claimed that he did not beat her up, adding that he only shoved her aside to go for his morning prayers in the course of their argument over the missing piece of fish. He said in the process, Fatimah accidentally hit her face against the door.

“Throughout the Ramadan period, Fatimah was in the habit of cooking very small quantity of food. Many times I would not eat to my satisfaction. To top it all, she would make sure she ate to her fill before serving me or the children. I did not complain because each time I did, it resulted to quarrel.

“When it was the turn of my last wife to cook, she (Fatimah) will double-cross others to serve herself first. On the fateful day, my last wife complained that Fatimah took the fish she reserved. I called her into my room, out of respect as my first wife to talk to her. We started arguing. When I saw that I was running late for my morning prayers, I shoved her aside and left the room. She accidentally hit her face against the door and started bleeding. God knows that I did not beat her up. I am not a wife beater,” he said.

On the marriage, he said, “I am also tired of the marriage. She has disrespected and embarrassed me enough. If she wants to leave my house, she is free, but I will not take responsibility for the children if she leaves with them. I will only cater for the children that are under my roof.”

Commenting on the incident, a human rights activist, Dr Joe Odumakin, described the action as “one of the most vicious forms of domestic violence.”

In her petition to the Lagos State House of Assembly on the issue, she wrote, “Women Arise for Change is worried about the prevalence of domestic violence such as this and unless drastic actions are taken, it is likely to continue unabated.

“All people, including women, are created equal by the Almighty, and they are therefore equal before the law.”

It was learnt that the case was reported at the Ijanikin Police Station and Kamorudeen was detained on Thursday. He was, however, granted bail on Friday.

Posted by Felix Akintunde at 13:09