...This also didn't happen in Nigeria. + Are foreign troops in Nigeria? 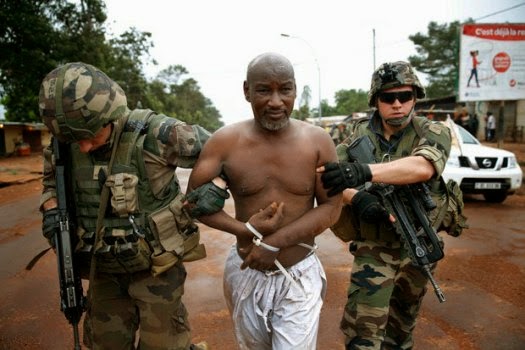 Some of you may have seen this photo and similar ones on several online platforms, claiming its US troops capturing a Boko Haram member....erm, it's false. U.S Pentagon has stated there will be no American troops in Nigeria...at least for now. The team sent are experts to help with communications, logistics, and intelligence. The pic above going viral is French troops in Central African Republic in 2013. (See here).

Also, you can see in all the pics floating online, from the uniforms, the African soldiers taking notes from American forces are from Uganda and Somalia. Military aid has been in Africa for sometime under AFRICOM to help train our military.

Now to the second issue; are there foreign troops in Nigeria? There are reports this morning that the Special Forces of the US Marines have sited the abducted Chibok Girls in Sambisa Forest...this report is hard to believe because the Pentagon, the UK and France made it clear that they are only providing intelligence service (intel & surveillance technology) to work with the Nigerian military..for now!

Also yesterday CNN said US intelligence made claims that the girls are not in a single location, so how come they've now been sited at Sambisa Forest? Even if US intelligence analysts were able to find the location, will they share the info with the media before the girls are rescued? So officially there are no foreign troops in Nigeria for now, except the foreign government is lying to the media about the kind of help they are providing and really sending troops.
Posted by Felix Akintunde at 03:32