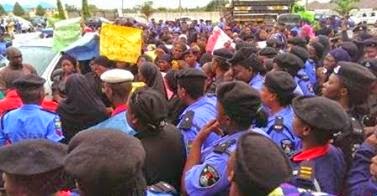 Chai... Chai... #DiaRisGodO! Nigeria police with all their gra-gra can't go to Sambisa Forest to rescue our girls, even the soldiers are playing hide-and-seek. But female police officers who dared to lend their voices to those of the girls' grieving parents by calling on Boko Haram to release them have been arrested.

This is Nigeria where anything is possible. After all, some policemen tried to extort me today (Saturday) in Lagos but they "walked away" after I disclosed my identity and told them where I was coming from.

Anyway, back to the matter. Here is the report of the arrested female Police officers:

The #BringBackOurGirls protest in Lafia, Nasarawa State, where some female police officers and the rank and file joined in the chants to save the schoolgirls abducted from Chibok in Borno State, has landed six senior police officers in detention at the Criminal Investigation Department (CID) in Lafia.

The command summoned and interrogated the six officers alongside Daily Trust reporter, Hir Joseph, because of the said participation of female cops in last Thursday’s #BringBackOurGirls protest in Lafia.

The officers were first interrogated at the state police command headquarters along Makurdi Road, and then moved to the state CID along Jos road, all lasting between past 12pm and 6pm when they were finally detained.

Posted by Felix Akintunde at 04:17