PHOTOS: Okada Man Flings Himself In Front Of Oncoming Trailer Over Seizure Of His Bike 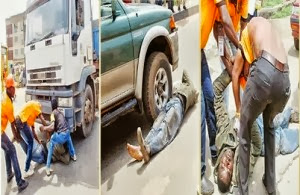 A desperate, angry Okada man tried to kill himself yesterday Thursday September 26th by throwing himself in front of a trailer and then, an SUV after his motorcycle was seized in Oyo State.


According to a report by Nigerian Tribune, the unidentified Okada man was stopped by officers of the Oyo State Commercial Vehicle Registration Unit and upon checking his papers, alleged they were fake, after which they seized his Okada.

According to eyewitnesses the man pleaded with the officers for a while but when his begging fell on deaf ears, he attempted suicide by flinging himself in front of two on coming vehicles.

Fortunately there were people around the area to rescue him both times. He later went into shock and started foaming from the mouth. Some policemen arrived the scene and took the man to the hospital.

ADS: Connect With Friends and Families on www.PuChat.Com

Posted by Felix Akintunde at 01:33