What Happened When Gov Nyako Visited Suntai On Monday 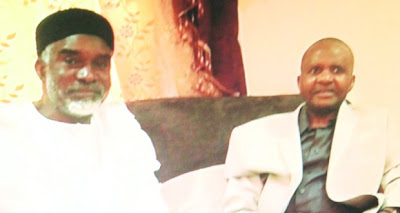 It was an emotional scene. Adamawa State Governor Mr Murtala Nyako was all tears yesterday as he visited Governor Danbaba Danfulani Suntai at the Government House, Jalingo.

Nyako, who is the first caller since Suntai’s return on Sunday from the Hospital Rehabilitation Centre & Home, New York, United States, spent over an hour with his counterpart in his inner sitting room.

The duo sat on one chair. Suntai was wearing an ash-colour suit with a blue-black shirt. Nyako was clad in a white agbada and a black cap.

He prayed for Suntai to recover fully. As Nyako prayed, Suntai bowed his head, responding–in a low voice: “Amen, amen”. Prayers over, Suntai clapped his hands and smiled.
Posted by Felix Akintunde at 13:24