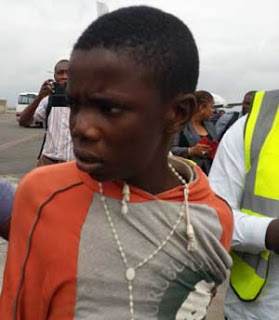 A teenager named Daniel Ikehina unbelievably beat airline and airport security at the Benin airport today Saturday August 24th and sneaked into the tyre compartment of a Lagos-bound Arik flight. The boy flew safely with the aircraft which left Benin around 9am today and landed at Murtala Muhammed airport, hidden throughout in the undercarriage. He was immediately arrested by airport security after passengers saw him emerging from the aircraft tyre hole.

The management of Arik Air has expressed shock over the incident wondering how the teenager beat the Aviation Security personnel at the Benin Airport to get to the runway.

Posted by Felix Akintunde at 12:15