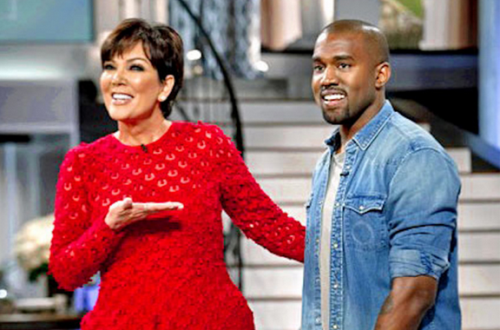 Kris Jenner's show 'Kris' is a miss in ratings. Since its debut in July, the show has been averaging about 202,000 viewers nationwide, according to Nielsen, which is really low compared to other talk shows. Ellen for instance averages more than 2 million viewers every day. Anyway, Kanye has come to her rescue by making an appearance on her show. An interview a lot of people would want to watch

A source confirms to Us Weekly that Kanye West has taped an appearance on Kris, where he talked about his relationship with Jenner's daughter Kim Kardashian and their 2-month-old baby girl, North.

West, 36, taped his special interview with Jenner, 57, in Culver City, Calif. on Monday, Aug. 19. The insider tells Us the rapper is "really bringing it" for the interview and opens up about the baby, living with Kris Jenner, his relationship with the press and love for Kardashian.

West even joked that he's been "so in love" with Kim, whom he began dating in April 2012, that he thought about "playing sports." (Kardashian, 32, was previously married to NBA player Kris Humphries and dated NFL player Reggie Bush.)

Kanye's appearance will air on Friday August 23.
Posted by Felix Akintunde at 00:08