Graphic photos: 1,300 Syrians gassed in their beds inside Damascus suburb 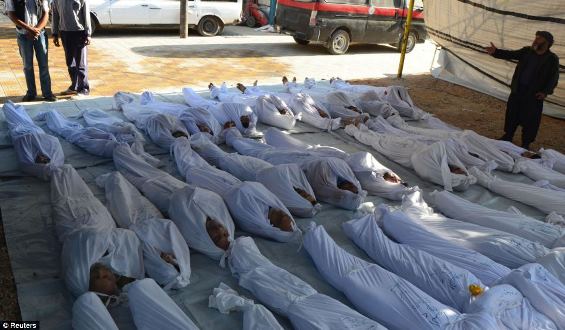 Shocking photos have been released showing the aftermath of the deadly chemical weapons unleashed on Damascus suburb, Ain Tarma, where 1,300 innocent Syrians were gassed in their beds

The attack yesterday have left the streets deserted and makeshift morgues piled high with bodies of innocent women, men and children while those who survived the attack are fighting for their lives in makeshift hospitals. The attackers used rockets to release fatal fumes over the suburb in the early hours of yesterday morning as people slept in their homes.

The Syrian president has denied being behind the attack as protests against it erupted in other parts of the world. What I don't understand is why the rest of the world is folding its hands while thousands of innocent people are being slaughtered in Syria.
Posted by Felix Akintunde at 09:58