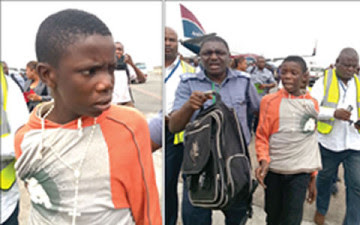 The 14 year old boy who beat airline and airport security at Benin airport on Saturday August 24th andflew in the tyre hole of a Lagos-bound Arik plane actually thought he was on his way to the US.

Sources at Benin Airport said Daniel Ikehina ran away from home because he was being maltreated and was trying to escape from his parents when he joined the Arik flight. Unfortunately for him the plane wasn't flying to the US, it was flying to Lagos where the stowaway was immediately arrested as he alighted from the wheel well of the aircraft. Daniel is presently in the custody of the State Security Service (SSS) who are trying to unravel how he managed to pull off such a stunt.
Posted by Felix Akintunde at 13:02