20 yrs old Suspected Pipeline Vandal Says He Did It To Save His Dying Wife. Read His Story! 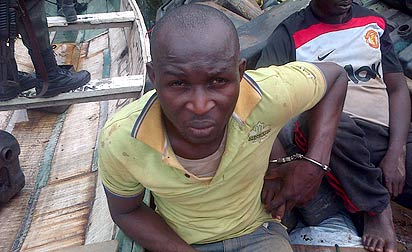 20 years old Owoye Ebiwe, 20, from Ondo state, was one of ten suspected pipeline vandals apprehended by the Special Task Force on Anti-Pipeline vandalism.
They were caught red-handed vandalizing a pipeline belonging to the Nigerian National Petroleum Corporation, NNPC, located in Elekete area of Ogun state.

While all the suspects freely opened up confessing their alleged involvement in the crime, Ebiwe was unusually calm. While that lasted, he bent down, scribbling what did not make sense on the wet ground. When approached, he raised his head  and behold, he was shedding tears.
Asked why he was crying, he lamented the woes he claimed had befallen him and eventually led him
Posted by Felix Akintunde at 20:31